Ginseng and chicken are a beautiful marriage of healing benefits and flavour. Chinese ginseng chicken soup incorporates some unique ingredients, setting the soup apart from versions of other oriental culture. This Chinese ginseng chicken soup is really easy to make and deeply delicious. Let’s take a look at the ingredients of this nourishing soup.

As food and medicine were evolved from the same origin in ancient China, food therapy is an important part of Traditional Chinese Medicine. In a food remedy, not only each ingredient should be of the highest quality, ingredients should also work synergetically together.  All the ingredients in this recipe have similar properties that are nourishing, strengthening, and warming.

I used a very special variety of chicken in this recipe, the silkie chicken. Silkie chicken, also called black chicken, contain high level of black pigments in its skin, flesh and bones. The silkie variety has more minerals, vitamins and anti-oxidants, than the regular chicken. Next time you see silkie chicken in the grocery store, be sure to pick one up!

What if I can’t find a silkie chicken? Just use a regular white chicken instead. The soup will still be authentic with a regular chicken. But using a silkie, aside from adding the extra yumminess and healing power, will also make you the coolest chef in the house.

I had been a patient of Traditional Chinese Medicine for many years, and I learned that there is so much I will never know about ginseng. Many people in the western culture think that ginseng is one specific plant. In reality, the name “ginseng” is a very general term, as if saying “mushroom” or “tea”. There are different varieties of ginseng grown in different regions of the world, with varying nutritional value and medicinal properties. In addition, ginseng can be fresh, or processed with different methods and aged, further changing the medicinal properties of the ginseng.

If you are into food therapy, you certainly shouldn’t be using all ginseng interchangeably for the purpose of tuning our health. For example, the American ginseng variety is known for its cooling property, while the Asian (Japanese, Korean, Chinese) ginseng varieties have the opposite warming and stimulating effects. Some dry aged ginseng are processed with other ingredients that provide additional benefits but may also act too aggressive for certain people.  It’s best to get assessed by a TCM practitioner or get recommendation from an experienced herbalist on what kind of ginseng is most suitable for the individual.

The kind of ginseng I use is recommended to me by my TCM herbalist. This variety is called “Shi Zhu Shen”, as it comes from the Shi Zhu area of China. It was also recommended to me to only take in the cold winter time, during the snow season. If you have access to ginseng, be mindful that the variety you have may carry different properties than mine, and the effects on you may be unique due to your state of health and even the season you are in. If you use American ginseng, they are more suitable for consumption year round.

After ginseng is cooked in the soup, the whole root can be eaten. Good quality ginseng are quite expensive, therefore not something to be wasteful of and discarded. I have been told and you may find this interesting too that the head of the ginseng root is more nutritious than the tail end. Jujube fruit (or red date) is another ingredient of the super food status in Chinese cuisine and traditional medicine. Jujubes are rich in iron and minerals, therefore frequently given to women to replenish blood. Additionally, jujube fruit has a big range of health benefits, making it a popular ingredient in many recipes supporting good health for everyone. Jujubes are naturally sweet, super versatile to be used in sweet and savory soups, desserts, porridges and teas.

The kind of jujubes we stock in the pantry are dehydrated. It’s very rare to find fresh jujubes, besides the dried ones last a really long time. Because jujubes are usually cooked in soups and added into teas, the dried jujubes will soak up the liquid and rehydrate.

Goji berry should be no stranger to the health-minded folks. In North America, I have seen this super food berry made into juice, tossed in the cereal bowl, pressed into granola bars, baked into breads. Traditionally, goji berries are most often used in healing soups and teas. Goji berries are great for general immune support, and known for strengthening liver and kidney functions and protecting eyesight.

You will hardly find a Chinese soup without ginger. Ginger has a warming nature, aids digestion, fights infection and being anti-inflammatory. Ginger pairs well with jujubes and goji berry – all 3 are classic ingredients in healing soups.

The value of ginseng and Silkie chicken are evident in Chinese medicine, as ginseng and silkie chicken soup is often served to the very special people at special occasions, such as the elderly with weakened health, a pregnant woman, a postpartum mother serving her confinement, a hard-working student studying for a big exam, or a patient recovering from a surgery.

Ginseng and silkie chicken soup is one of the most popular healing soups in Chinese cuisine and traditional medicine. The Chinese swear by a long list of benefits passed down for generations:

One of the things I have come to appreciate the most about Traditional Chinese medicine is the recognition of how individuals are different. Each remedy, no matter how nutritious, isn’t suitable for every person and situation.

Remember that I am using Asian ginseng in this ginseng chicken soup? This remedy is not suitable for those who have too much energy, fire and heat, of high blood pressure, or with liver and gallbladder diseases. You also shouldn’t be eating ginseng chicken soup during a flu, fever or infection.  Watch for signs that ginseng chicken soup may not agree with you, such as dry mouth and throat, nose bleed, headaches and insomnia. The effect of the remedy may be too stimulating and aggressive, at such times we need to back off or reduce the consumption.

How to Prepare the Chicken

In order to achieve the most delicious and beautiful soup, here are a few important steps I take to prepare the chicken. 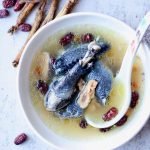 Share400
Pin243
Tweet
Yum19
Reddit
Share
Yang’s Nourishing Kitchen is a participant in the Amazon Services LLC Associates Program, an affiliate advertising program designed to provide a means for us to earn fees by linking to amazon.com and affiliated sites. I may receive monetary compensation or other types of remuneration for my endorsement, recommendation, testimonial and/or link to any products or services from this blog. For more information, see the full disclosure.

I found cure naturally for my incurable fibromyalgia. I believe you too can heal from ailments by listening to your own body. Let me show you how to use traditional wisdom to heal and use food as medicine. Read More… 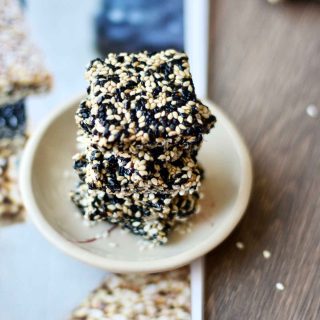 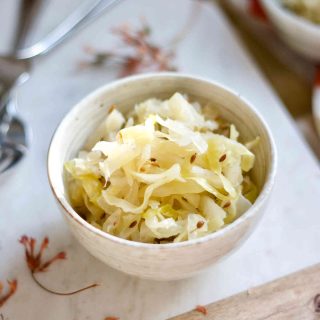 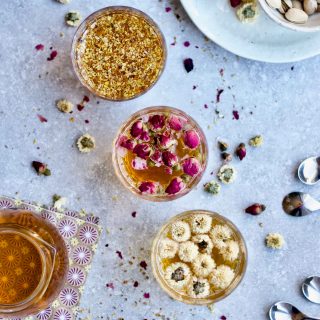 Born and raised in China, now living in Canada for the past 20+ years, Yang shares time-tested traditional wisdom from the east to the west, through nutrient-dense real food recipes. 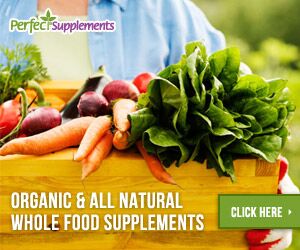 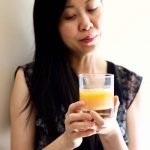 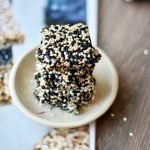 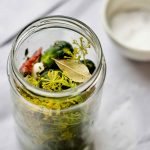 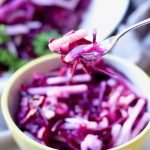 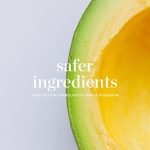 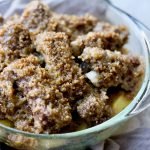